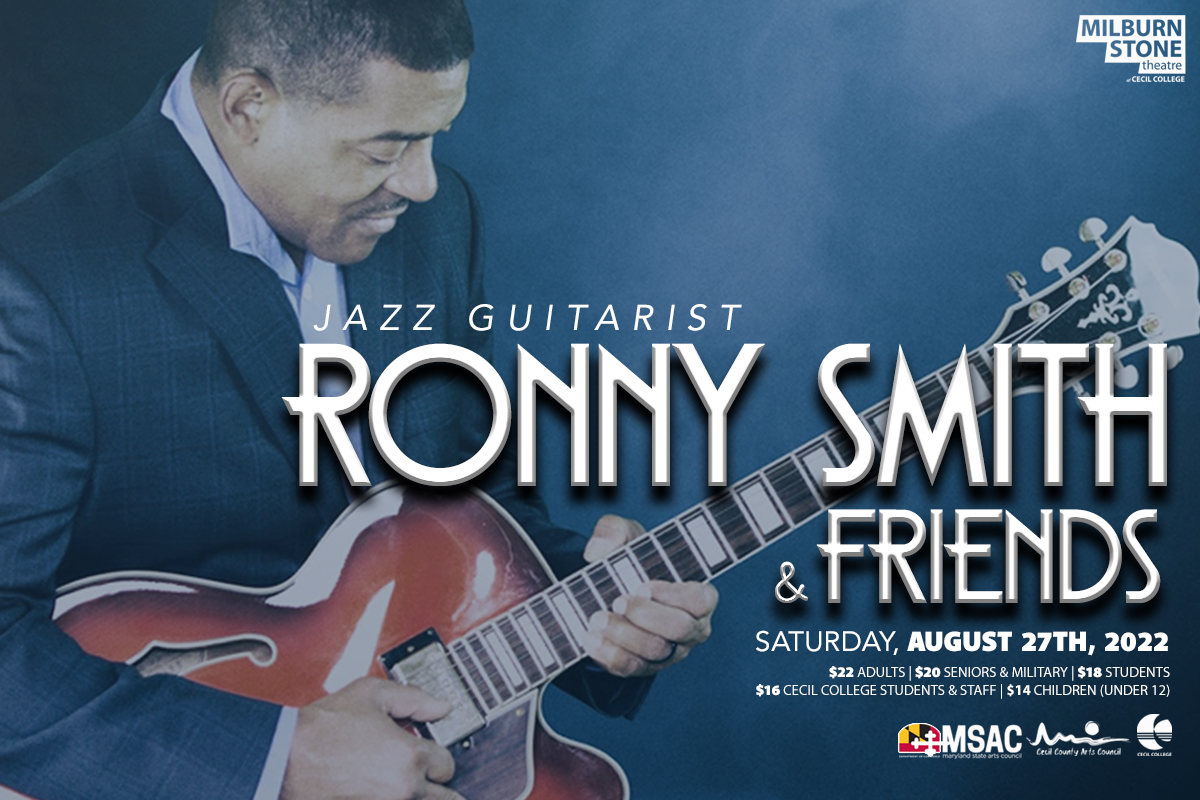 Born in Baltimore Maryland, Grammy considered guitarist Ronny Smith is certainly one of the most underrated guitarists in music history.  Smith’s playing is not dissimilar from Nick Colionne but with touches of Benson/ Norman Brown and even 70’s Johnny Guitar Watson, however still owns his significant unique style.

His unique style appeals the audience, and shows in his number of releases like Long Time Comin (2001), Laid Back (2002), Got Groove (2006), Simply Stated (2007), Just Groovin (2009) and Can’t Stop Now (2013) Can’t Stop Now – hit #1 on Billboard’s BDS New and Active smooth jazz chart and ultimately reached #25 on the Billboard BDS Top 30, Shake It Up (2017), Raise the Roof (2020) and Coastal Sunset (2021) with his essential return with a special twist. His experiences have afforded him the opportunity to tour extensively throughout the United States, Germany (Frankfurt, Stuttgart, Heidelberg), Nijmegen, Holland to La Paz, Bolivia. He has shared the stage with such artists as the Marvelettes, jazz drummer Bobby Durham, and trumpeter Donald Byrd.  He has recorded with some of the top session musicians of the Nashville and the California scene, to include, Gary Lunn (Peter Cetera), Pat Coil (Michael McDonald), Craig Nelson (Ben Tankard), and Dan Needham (Euge Groove), Scott Martin and Stan Martin (Quincy Jones) and Andy Martin (Gordon Goodwin’s Big Phat band).

Renowned jazz journalist and author Scott Yanow wrote, “Guitarist Ronny Smith’s mellow tone, subtle creativity and ability to groove over catchy rhythms have made him an increasingly popular force in contemporary jazz.” Jazz Journalist Brian Soergel, Jazz Times wrote, “Sometimes in the middle of night I wake with a start and wonder if any guitar-based contemporary instrumental music would ever have been created if George Benson, Wes Montgomery and Joe Pass had never been born. After hearing the first few seconds of Ronny Smith you’ll note the influences from this troika of geniuses and know that their legacies are in good hands”.

If you’re a fan of all styles of instrumental music and admire musicians who are true innovators and adventurers – and if you feel there’s more to musical success than simply hitting big on the smooth jazz charts – then Ronny Smith is your kind of guy. The veteran guitarist may have been labeled a “tweener” by smooth jazz radio programmers for not being one thing or another over the years, but his expansive artistry and incredible spirit of eclecticism has led him to build a loyal following on his own terms, expressing music the way the muse inspires him. The title of his latest brilliant work Coastal Sunset may inspire thoughts of happy, spirited tropical music – and there’s certainly a little of that for you to enjoy as an initial invitation. But don’t get so caught up in the breezy balminess that you can’t enjoy his deeper expressions and his latest freewheeling fun with the groove – most notably on tunes like “Feelin Froggy,” the wild hybrid “Blues Like This” and that wild lead single “String of Hearts” which frankly ain’t no tweener and will be lighting up the urban jazz charts for months to come. – Jonathan Widran, The JW Vibe

The event is finished.

MURDER ON THE NILE